A slim book published in 1920, entitled “Permission to Annihilate Life Unworthy of Life,” is often invoked when scholars try to explain the prehistory of the Nazi “euthanasia” murder program which is estimated to have claimed nearly 300,000 victims. Far less well studied are the various counter-positions proposed by Christian authors – theologians, pastors, charity institution directors – who, during the years of the Weimar Republic, strove to argue that the killing of those demeaningly labeled as “life unworthy of life” should be considered morally unacceptable. The Christians, it turns out, had difficulties finding convincing words. This lecture concerns a moral-political paradigm shift. In the first years of the twentieth century, the labor of care for the most vulnerable members of society had still been avidly promoted as truly God’s work. Yet already between the mid-1920s and the early 1930s, the confidence in that life-sustaining perspective would be seriously eroded. Revisiting the corpus of response texts and seeing there the extraordinary ambivalences charity-spokesmen evinced, the phantasmatic connections they elaborated between Jewishness and disability, the specific compromise formations they evolved, and their elaborate reworkings of theological concepts to take economic and sexual-political concerns into account, in turn gives us original perspectives on important dynamics during the Nazi Third Reich and its immediate aftermath.

Dagmar Herzog is Distinguished Professor of History and Daniel Rose Faculty Scholar at the CUNY Graduate Center. Publications include: Sex after Fascism: Memory and Morality in Twentieth-Century Germany; Sexuality in Europe: A Twentieth-Century History; Cold War Freud: Psychoanalysis in an Age of Catastrophes; Unlearning Eugenics: Sexuality, Reproduction and Disability in Post-Nazi Europe; and (coedited with Chelsea Schields) The Routledge Companion to Sexuality and Colonialism. Her current project, Eugenic Phantasms, considers how a focus on the theology and politics of disability in twentieth-century Germany changes how we think about racism and fascism alike.

Due to the ongoing COVID-19 pandemic, we strongly recommend everyone in attendance to wear a mask at all times. Please arrive on-time to ensure you will have a seat. Thank you for your cooperation and understanding.

If you require an accommodation for effective communication (ASL interpreting/CART captioning, alternative media formats, etc.) or information about campus mobility access features in order to fully participate in this event, please contact Ray Savord at rsavord@berkeley.edu or (510) 642-4555 with as much advance notice as possible and at least 7-10 days in advance of the event. 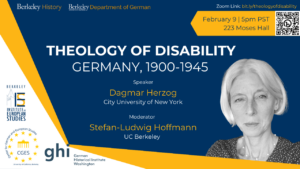