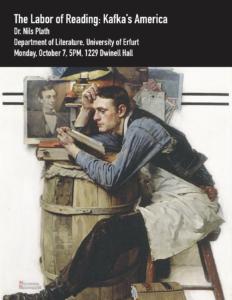 This lecture is part of a larger research project to reexamine literary and theoretical configurations of reading as labor and work, including their medial, gender-related, and institutional framings. It is the goal to inquire how historical and contemporary concepts of labor and work can be challenged by a closer look at the actuality of reading. It is the assumption that reading and working are intrinsically connected and function as incommensurable practices, e.g. in terms of a never quite assurable ‘doing’, as bodily and transformative dynamics, or as elective affinities between ‘load’ and ‘lust’, profession and confession.
The laborious task of reading, and its oscillation between hope and forlorness, can be viewed exemplary in one chapter of Franz Kafka’s Der Verschollene, his unfinished novel on America; a chapter in which Karl Rossmann interviews a student occupied by the perpetual duty of reading. Not without reference to other ‘reading-passages’ in Kafka’s writings, this particular chapter allows for a close reading with regard to reading practices applied there–as well as for a productive examination of the notion of economy in Kafka’s novel and work in general. It can be argued that Kafka’s “America” serves as a prominent placeholder for workings through some cultural debates dominating the collective subconscious of his era, especially when described as a place where work and reading collide. As often overlooked in the many attempts to interpret the novel, reading here serves as the decisive other to work–and is nonetheless described as a laborious task. Thus, Kafka’s ‘erlesenes’ (re-read) “America”–drawn up from readings informed within the context of particular cultural debates and the presence of certain economic theories–might be much more than just of historical interest for today’s readings: In actuality, its description by Kafka allows in the here and now to comment anew upon the dependence of work and reading, and the attributed importance of either or in the various discourses.