A panel of UC Berkeley faculty from the Humanities and Social sciences will speak with Eiland about Benjamin’s book, including issues involving Eiland’s new translation of and introduction to the text, as well as those raised by Eiland’s Monday, February 10 talk, “Hamlet as Trauerspiel?” (see further below for description of the February 10 talk).  The panel will then open things up by inviting questions and discussion from the audience.

For those wishing to attend the panel-and-audience discussion, please email critical_theory@berkeley.edu to receive excerpts from Benjamin’s Origin.

Origin of the German Trauerspiel was Walter Benjamin’s first full, historically-oriented analysis of modernity. Readers of English knew it until last year under the title The Origin of German Tragic Drama, but in fact the subject is something else: the play of mourning. Howard Eiland’s completely new English translation and introduction (Harvard University Press, 2019), the first to appear since 1977, is closer to the German text and more consistent with Benjamin’s philosophical idiom.

Focusing on the extravagant and histrionic seventeenth-century theatrical genre of the trauerspiel, precursor of the opera, Benjamin identifies allegory as the constitutive trope of the Baroque and of modernity itself. Allegorical perception bespeaks a world of mutability and equivocation, a melancholy sense of eternal transience without access to the transcendentals of the medieval mystery plays—though no less haunted and bedeviled, and no less susceptible to momentary apotheosis. History as trauerspiel—as shaped by the base machination of schemers—is in Benjamin’s account the condition as well as subject of modern allegory in its inscription of the abyssal, of ever-increasing, apparently incomprehensible, layers of depth, experience, and interpretive questions.

Benjamin’s investigation of the trauerspiel includes German texts and late Renaissance European drama such as Shakespeare’s Hamlet and Calderón’s Life Is a Dream. The book’s Prologue is one of Benjamin’s most important and difficult pieces of writing. It sets forth his method of indirection and his idea of the “constellation” (which would become crucial to thinkers across several generations of the Frankfurt School, as well to other critics, philosophers, theorists, and artists) as a key means of grasping the world, of constructing dynamic unities from the myriad bits of daily life and historical materials. Thoroughly annotated with a philological and historical introduction and other explanatory and supplementary material, Eiland’s rigorous and elegant new translation brings fresh understanding to a cardinal work by one of the twentieth century’s greatest literary critics.

Eiland’s talk “Hamlet as Trauerspiel?” approaches Benjamin’s interpretation of Hamlet—which deems the play a consummate trauerspiel—as a way into the thorny interior of the trauerspiel book itself.  Benjamin presents the theory of the trauerspiel as containing  “prolegomena” to the interpretation of Shakespearean “tragedy” (Benjamin faults critics for their “loose usage” of the term “tragedy”), and to the interpretation of Hamlet in particular. Eiland examines Benjamin’s claims for decisive historical and formal-stylistic differences between the genres of tragedy and trauerspiel—the former based in pagan myth and cult, the latter in Judeo-Christian history and spectacle; the former embedded in dialogue, the latter in the Dingwelt—and Eiland then briefly traces these distinctions back through the German critical-philological tradition, to Herder and A.W. Schlegel. Eiland focuses, first, on the philosophical-historical “antinomies of allegoresis” that structure the trauerspiel world, and then on Benjamin’s discussion of the enigmatic themes of “fate” and “play.” These issues are all reflected and crystallized in Hamlet‘s death scene, which Benjamin here presents—in its “vehement externality,” its crucial reliance on props and its profusion of corpses, as well as in its hint of apotheosis—as typical of the trauerspiel. All of which leads Benjamin to conclude that Hamlet’s death is definitely not tragic. Eiland takes issue with this last assessment, arguing for the prince as a tragic hero of recognition and remembrance. 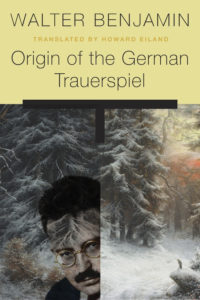 Howard Eiland taught literature for several decades at the Massachusetts Institute of Technology, and is co-editor, translator, and author in the ongoing Walter Benjamin: Selected Writings series from Harvard University Press.  The many volumes in the series that he’s translated, edited, and/or co-authored include The Arcades Project (2002); Walter Benjamin: A Critical Life (2014); and, most recently, the new translation of and introduction to Benjamin’s Origin of the German Trauerspiel (2019).

This event is co-sponsored by the Program in Critical Theory and City Lights Booksellers and Publishers.