by Molly Krueger in News, Uncategorized 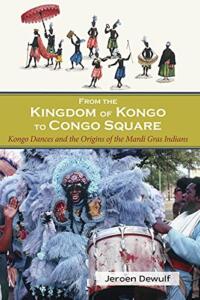 Professor Jeroen Dewulf published From the Kingdom of Kongo to Congo Square: Kongo Dances and the Origins of the Mardi Gras Indians. The book presents a provocatively new interpretation of one of New Orleans’s most enigmatic traditions—the Mardi Gras Indians. By interpreting the tradition in an Atlantic context, Dewulf traces the “black Indians” back to the ancient Kingdom of Kongo and its war dance known as sangamento. Enslaved Kongolese brought the rhythm, dancing moves, and feathered headwear of sangamentos to the Americas in performances that came to be known as “Kongo dances.”

Dewulf’s groundbreaking research suggests a much greater impact of Kongolese traditions and of popular Catholicism on the development of African American cultural heritage and identity. His conclusions force us to radically rethink the traditional narrative on the Mardi Gras Indians, the kings of Zulu, and the origins of black participation in Mardi Gras celebrations.